The different types of tuberculosis 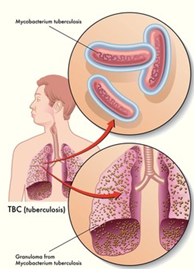 Tuberculosis is an infection, communicable disease caused by Mycobacterium tuberculosis. It  most frequently affects the lings, but may also involve the larynx, the bones and joints, the skin, the lymph nodes, the intestines, the kidneys, and the nervous system. The disease is usually contracted by the inhalation of the bacilli into the lungs or by swallowing contaminated food. Droplets of sputum sprayed by an infected person during sneezing and coughing spread the germs directly to others and into the air. The germs are also able to survive for long periods in dried sputum and in the dust. Because of eradication of tuberculosis in cattle and widespread  pasteurization of milk, transmission of the disease from infected cows is now rare. The tuberculosis bacillus can infect almost any body tissue

Symptoms are: loss of weight, weakness, coughing, blood-streaked sputum and fever that tends to to rise gradually during the day.

Miliary tuberculosis is a condition caused by the spread of large numbers of the bacilli to many parts  of the body. This type of tuberculosis can affect the meninges (the membranes covering the brain and spinal cord) causing a serious infection called tuberculous meningitis

Pott’s disease is tuberculosis of the spine and results in hunchback (kyphosis) . It is now rare.

Treatment:  Many people with tuberculosis can be treated at home, although a rest cure in a sanatorium maybe recommended in most cases. There are several medicines used to control and cure the disease, the three main ones are streptomycin, isoniazid (INH) and pas (para-aminosalicylic acid)

Prevention : The best prevention is to maintain good health and to keep away from people who have tuberculosis. If you have a cough that persists for more than two or three  weeks or if you feel tired all of the time and keep losing weight, get medical advised as soon as possible. Never drink unpasteurized milk even if it is certified, because even healthy looking cattle can transmit tuberculosis germs

Yearly X ray tests of the chest are no longer  recommended  by many doctors because of the fear that the rays may caused cancer, however, everyone should have a  tuberculin test