Motorist beaten to death in mob attack after 'splashing' pedestrian 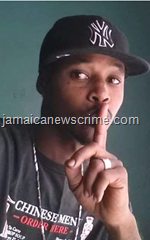 The St. Andrew South Police have launched a search for several persons involved in the mob killing of a forklift handler after his vehicle splashed a resident on Ricketts Crescent, Kingston 13, during Thursday's heavy rain.

The dead man has been identified as 30 year old Okeefe Sewell, a resident of Chisholm Avenue, St. Andrew.

About 5:50 pm Mr. Sewell was driving his car along Ricketts Crescent when he allegedly splashed the resident.

It is reported that Mr. Sewell stopped when the resident in protest threw an object which hit the vehicle.

This led to an argument.

During the dispute, Mr. Sewell was set upon by other residents.

He was stabbed in the back and while on the ground the residents reportedly threw building blocks on his head.

He was pronounced dead at the Kingston Public Hospital.

The St. Andrew South Police have listed an man known as "Con man" and "Andre" as a person of interest in the case.

The cops raided his house on Friday.

He has reportedly gone into hiding.

The police are urging him to surrender to the Hunts Bay Police Station immediately for questioning.