Home Archives Subscribe
Teen killed by off-duty policeman in Hanover
Johnson & Johnson recalls 33,000 bottles of baby powder in the US

Fraser-Pryce nominated for IAAF Female Athlete of the Year 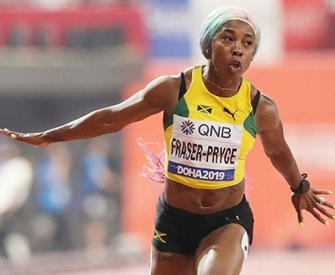 Jamaica's world 100 metre champion Shelly-Ann Fraser-Pryce is among 11 nominees shortlisted for the IAAF Female Athlete of the Year Award. Fraser-Pryce has been nominated for having won a 4th world 100m title in Doha earlier this month as well as for helping to secure gold for Jamaica in the sprint relay.
Additionally, she also won the Pan American Games 100 metre title and won seven of her 100 meter races this season. Kenya's Brigid Kosgei who broke the women's marathon world record on Sunday in Chicago, is also among the nominees along with American Dalilah Muhammad who broke her own world record to win in the women's 400 metre hurdles at the World Championships in Doha.
Kenyan distance runners Beatrice Chepkoech and Hellen Obiri, British heptathlete Katarina Johnson-Thompson, Dutch distance runner Sifan Hassan, German long jumper Malaika Mihambo, Bahraini quarter-miler Salwa Eid Naser and Venezuelan triple jumper Yulimar Rojas complete the list.
A three-way voting process will determine the finalists. The male and female world Athletes of the Year will be announced live on stage at the 2019 World Athletics Awards on Saturday, November 23 in Monaco.