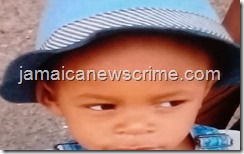 A one year-old boy died in a fire on Tuesday evening which destroyed a house on Bay Farm Road in St. Andrew.

He has been identified as Neymar Facey.

Fire personnel were informed of the blaze shortly after 6.00 p.m., and four units were dispatched.

Dennis Lyons, Assistant Superintendent of the York Park Fire Station, said investigators were told that the boy's mother left him at home with two other children – one 17 years old and the other a five-year old.

He said the five year-old child accidentally set a mattress on fire and the fire spread to the rest of the building.

Help was immediately sought but it was too late to save the child.